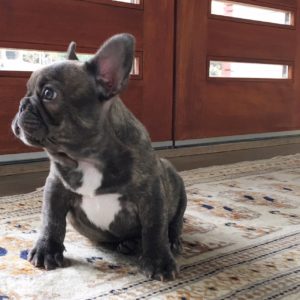 Rico Suave holds the position of C.O.D. (Chief Office Dog). He is a 1-year veteran who carefully oversees all office transactions (and shenanigans). He rules the office with an “iron-paw” and his stubborn negotiating tactics have won him several awards and numerous treats. He loves to hunt for the best deal and will challenge any competitor to a tug-of-war contest, especially if you mess with his green rubber ball. In his free time (which is all the time) he enjoys sleeping, eating, sleeping, chasing squirrels, sleeping, barking at the FedEx guy, sleeping and taking short walks at dusk. He loves the snow but hates getting his paws wet when it’s raining outside. Mornings aren’t really his thing. In fact, he typically shows up for work just in time for his lunch break… Hey, it’s a tough job, but somebody’s gotta do it!

Thomas Hohol
The sale of our home could not have bee more seamless. From the first moment we met Vanessa Reilly with Domo Realty it was clear that we were her number one priority. Vanessa was always available to answer our questions, and at times calm our anxiety. She took the time to listen to our expectations, and was quick to follow through with her promises. If you are considering selling your home in the Atlanta area or are scouting for the absolutely perfect place to create the next chapter, do yourselves a favor and contact Vanessa.

Hartmut Jordan
I worked with Domo Realty finding and purchasing my home 6 years ago, and because of the great experience, I knew I'd use them again for selling my home this past month. Vanessa was superb. Her local knowledge, the way she promoted the listing, her pointers for presenting the home, everything was spot on. I ended up having 9 offers within 3 days of the listing. Picked the best one and closed 4 weeks later. Truly an exceptional selling experience! I will lay low for a bit and then reach out to purchase a new home with the fantastic team at Domo and Vanessa when the time is right. Highly recommend Vanessa and her team of experts! 5 stars!

John Corry
I cannot give Vanessa high enough praise. She's the undisputed champion realtor of Northcrest MCM homes so it was very clear that we should hire her to represent us in the sale of our Northcrest home. Throughout the process, from beginning to end, I was repeatedly impressed with the level of service she provided. She took care of everything, guiding us through the entire process with calm, smooth efficiency...even though we were nervous, inexperienced home-sellers. The result of her cool attention to every detail was an amazing contract that had no problems and closed effortlessly. Best realtor ever. No competition. In an age where we are continually disappointed by the lackadaisical, careless provided in almost every industry, it was a refreshing relief to be able to work with a real professional who runs a tightly buttoned up ship with the utmost competence. I wish she would diversify into virtually anything else (home renovations?) so that I could hire her there to get the same exquisite level of service.

Debora Knott
Vanessa is the ultimate professional. We appreciated her advice, follow through and knowledge. But most of all she gave us the pros and cons on every decision we had to make. It was a pleasure to watch Vanessa successfully manage sale after sale in our historic midcentury modern neighborhood. She has the buyers who will love your MCM home. I highly recommend Vanessa to sellers/buyers who are looking for talent and a steady hand in this crazy time in real estate.

Mark Purvis
I have had only the best experiences with Vanessa!  I have bought and sold with her multiple times now and am always so pleased with her professionally and personally.  Nobody knows Atlanta’s midcentury market as well as her, but she is not only a MCM expert.  Most recently, she helped us win a bidding war for THE perfect Intown craftsman bungalow.  Vanessa is knowledgeable, professional, communicates updates quickly and is generally one of the most enjoyable people I have ever worked with.

Brian Robboy
While I've seen Vanessa in action for years, this was my first opportunity to work with her on a transaction of my own. I can honestly say it could not have gone better. Vanessa brought perfectly-matched, well-qualified buyers to the table - and had my home under contract at the price and terms I wanted before it ever hit the market. Not having to deal with the challenges of a typical home sale was a huge plus. Vanessa handled everything from start to finish with no hiccups. Her extensive knowledge of our neighborhood, the Atlanta real estate market, and MCM in general make her an industry leader. Vanessa made parting with 23 great years in a home and neighborhood I truly loved much easier than I ever thought it could be. I'd do it again in a heartbeat.

Emily Prezzato
Vanessa made our home selling process quick and painless. Her excellent reputation in our neighborhood and knowledge of the local market made her an easy choice as an agent. She was professional, communicative, and honest through the entire process. We followed her advice and strategy and received multiple offers over list price within the first 72 hours. We couldn’t recommend Vanessa more highly!

Drew Pihera
Vanessa made the finding and purchase of a new home absolutely painless, even with me being as picky as I could be. Her knowledge of the area coupled with her instincts as a realtor found the perfect home and got a fantastic deal, even in the sellers market that exists currently. I would not hesitate to recommend her services to anyone, and plan to also have her act as my seller's agent once ready to sell my previous home. She is a consummate professional and will no doubt be of benefit to anyone in need of her services.

Sarah Neuburger
THE BEST! Vanessa helped find us the home of our dreams and made the entire process incredibly easy and stress-free. We couldn't believe she was able to find exactly what we wanted in an incredibly busy market. Highly recommended!

Kaye Patton
We contacted Vanessa about a month and a half before wanting to put the house on the market, and she worked with us to come up with an exact plan to get the house ready to sell. She is an expert realtor for our neighborhood - and an expert communicator who was in contact with us every step of the way. We were a first time seller with LOTS of questions, and she provided us with insight and answered all our questions with knowledge and patience. With following her schedule for getting the house ready, the photoshoot, and putting the house on the market, we were able to go under contract in 4 days and sell our house with OVER asking price! We are very thankful to work with Vanessa and would recommend working with her to all our friends.